Kate is a pianist, teacher and producer for a number of independent music projects and concert series. She currently teaches at Trinity Laban Conservatoire of Music and Dance and Birmingham Conservatoire.

Kate grew up in North Stainmore in the Upper Eden Valley.

What instruments do you play? I’m a pianist and have also performed with harpsichord, the harmonium and countless electronic keyboards. I played violin too until the end of my first year at Music College and then Organ but neither very well!

I was interested in music from being quite small and used to like having a dance to Top of the Pops apparently. I learnt recorder first at school and enjoyed it but I really wanted to learn piano for some reason and eventually got one from a neighbour. I started piano lessons when I was aged about 8.

I tried a few wind and string instruments after that and settled on violin as a second instrument to learn. I wasn’t natural at violin and can’t say I enjoyed it that much but I really enjoyed being able to play in Penrith Youth Orchestra (in the 80’s with my violin teacher John Upson). I also did a lot of solo and chamber music concerts through my piano teacher (Pat Shackleton in Grange over Sands and then in Troutbeck), which I loved and met friends that way who were also interested in music. We did a lot of Early music too and I was pretty smitten with harpsichord and recorder for a while.

I was doing a lot of performing in Cumbria by 6th Form and also further afield and playing for lots of different audiences was exciting – we did concerts in people’s front rooms, freezing remote Chapels and then we’d be at Levens Hall or Keswick Music Festival.

How did start your career in music?

I went to the Royal College of Music in the late 80’s and started playing in a lot of College concerts – accompanying and chamber music were what I enjoyed most but there was a lot of solo work too. I also started making a living doing a mix of professional work and also teaching piano in schools and travelling round to people’s houses. It was a real culture shock for me, after growing up on North Stainmore.

It was a very competitive environment at College but I did enjoy it and learnt a lot from some outstanding teachers and performers – and other students too. Thankfully, my teachers Kendall Taylor and Yonty Solomon were incredibly inspiring but also practical and supportive. There were a lot of opportunities and I met so many more musicians, including friends I still have today.

What’s the best thing about your job?

There’s lots of variety in my performance work, as I’m freelance and I really enjoy the travelling that’s often involved. It’s also satisfying and challenging to organise your own projects and programmes which is always good but it helps if you like constantly planning and doing lots of things at once. I organise and fundraise for a lot of projects too as a producer and that’s really extended my interests in all sorts of ways. Working with lots of different composers, ensembles and younger musicians is great and I also commission new music.

It’s difficult to choose just one and I’m sure I’ve forgotten some too, at this point. I had some great musical experiences in Cumbria as a youngster and was very lucky through my teachers, playing at some amazing historic venues and with local ensembles and orchestras. Learning violin at 6th form with Richard Deakin (RNCM) was a real turning point as I then started accompanying more seriously and learning a much wider range of chamber repertoire. In my last few years of school I also had piano Master Classes with Edith Vogel and John Odgen at Rosehill Theatre, Whitehaven which had a massive influence on me. Also with John Lill and Kendall Taylor, who I went on to study with at College.

Highlights since then, as a professional, might be working with Michael Clark Dance Company ‘Oh My Goddess’ at Sadlers Wells, Ockham’s Razor aerial theatre company ‘Not Until We Are Lost’ and Multiple Piano Day for BBC Proms when I was a pianist in Piano Circus; I developed a project at The Banff Centre in Canada and working with various composers for different albums have been memorable. Also concerts I’ve performed in internationally – It’s a great profession if you like travelling and seeing new places, which I really do. Over time I’ve moved away from my classical background and repertoire into more experimental music, with improvised and electronic elements. I’ve also worked increasingly with composers and performers who like to make new work.

Reading, film, walking and I listen to a lot of radio – also living in different places!

Go to lots of live performances, whatever they are. It’s so easy now to stream live performances from other places too so there’s a chance to engage with so many more musicians and music from all over the world. It’s also so important to learn with a teacher you get on with and although that’s not always easy to find in a rural area it makes all the difference.

Try to play and perform with others as often as you can, as you can learn so much and having a group of friends with a shared joy in music making is important and also helpful if you’re a young composer.

Practising effectively and rehearsal skills are really essential later on, if you’re planning to go to conservatoire or university. It’s worth all the hard work but it is a challenging career, with lots of variety so do think about how to look after yourself physically and mentally and take time out too. 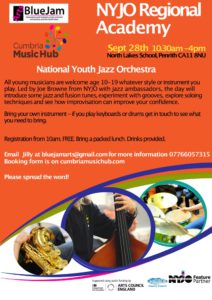