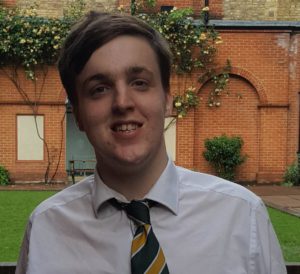 For our June Musician we picked a young man at the start of his musical career. A former member of our own Cumbria Youth Orchestra and Westmorland Youth Orchestra, Joe is now in his first year at the University of Oxford studying music. Joe presented a production of Purcell’s opera Dido and Aeneas in Penrith in July.

What’s your connection with Cumbria?

I’ve lived in Cumbria since I was five years old (after moving from Liverpool), and went to school in Appleby and Penrith. I now spend most of my time in Oxford but come back in the holidays frequently.

What instruments do you play?

My main instrument is Cello, but I find I’m having less and less time to do that as I now seem to be waving my arms around all the time (conducting, I think it’s called..?)!

I also sing and have played piano and organ.

I come from a very musical family, so the fact that I was going to play an instrument was almost assumed… I played Piano and Cello from fairly young ages (6 and 9 I recall..), but I suppose when I became good enough to be able to join musical groups and make music with others that it really became a passion!

How did you start your career in music?

My old Cello teacher used to say that ‘a musician’s career begins when they play an instrument for the first time, and ends when the phone stops ringing!’. But I started getting paid work just by auditioning for things, playing in concerts, and generally getting noticed: it’s best to get your name circulated as soon as you can!

What’s the best thing about being a musician?

Meeting more and more interesting people every day, and playing some of the world’s greatest music with them! It’s also highly varied, which I find a good thing.

Singing at the Proms or playing in Mahler 2 at the Royal Albert and the Sheldonian were pretty amazing, of course, but to be honest some of the much simpler things also stick out. I remember hearing Mahler’s first Symphony for the first time and being completely and utterly stuck by the emotional complexities the piece had to offer: it honestly changed my life, but the weirdest thing was I was on the train from Oxford to Penrith at the time so it’s a very odd memory.

I’m a huge fan of Liverpool Football Club (although I know that will divide opinions..), but also love watching plays and visiting art galleries when I get the chance.

If music is what you love doing, then do it as much as you can! What’s also important is that it’s so easy to become over-competetive about it, which really doesn’t help anyone. Do music because it’s your passion, not because you think you’re the best…

This site uses Akismet to reduce spam. Learn how your comment data is processed.